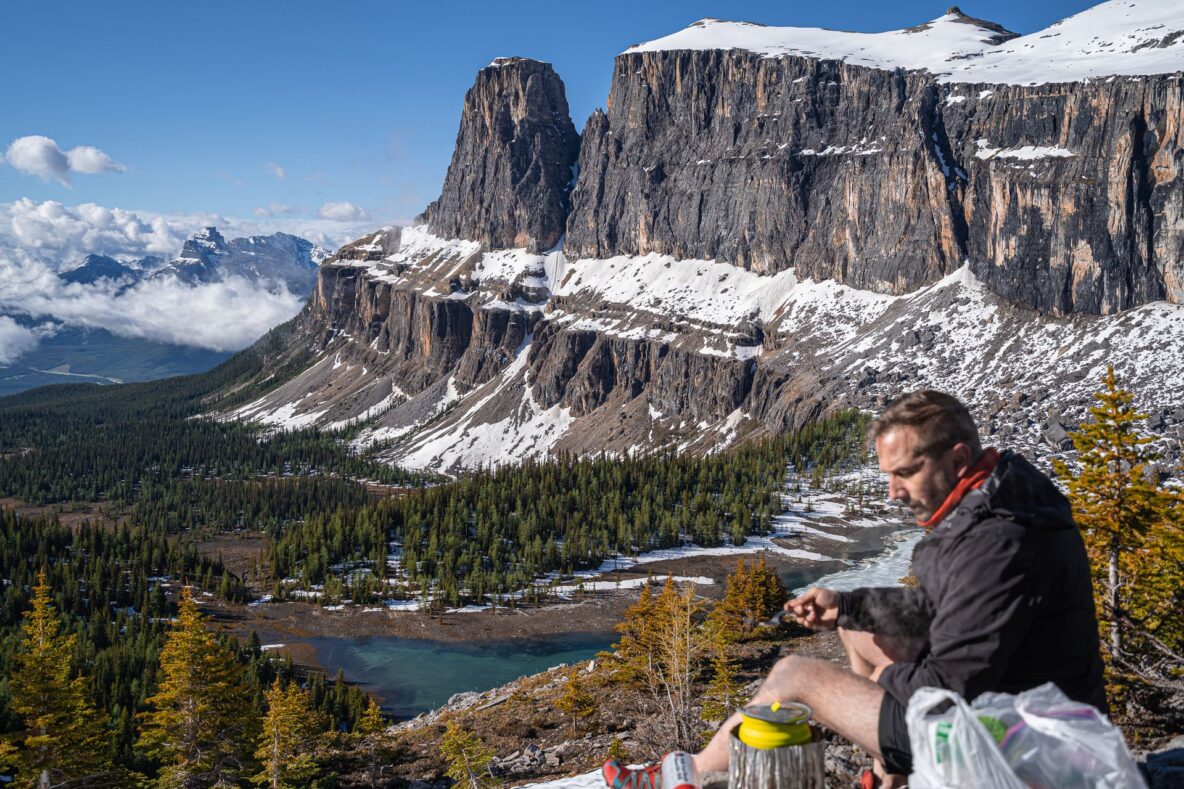 Anyone who knows me knows I can’t stand hiking in the trees. Having been fed a steady diet of alpine views since I was a kid, getting up where I can see has been an addiction I’ve rarely let go of. Unfortunately for me though, many great objectives lie at the end of a hallway of dense forest. Helena Peak and Rockbound Lake are no exception.

While I’m not normally one to seek out views that include highways, overpasses, and the Chateau Lake Louise, the views at Rockbound Lake and higher up at Mount Helena has vistas that make that sacrifice worth worth every step.

The trail starts out from the Rockbound Lake trail head parking lot and follows what used to be an old fire road. Once into the trees a couple hundred meters, the grade begins to rise. It is relentless yet manageable, and doesn’t give you any reprieve until you reach the second switchback. The fire road ends shortly before this point (approximately at km 5.5), narrowing into a gently winding and rooty trail. As you wander through the forest, you’ll pass the alternate route to Eisenhower tower and the Goat Plateau, a smaller but well marked trail branching off the the left. Finally, the trees will begin to subside as you roll over a few gravel bands that are likely remnants of a terminal moraine or three. You’ll see the Eisenhower Tower to your left and Helena Peak and Ridge to your right. At this point, it can get soft and swampy, so be sure to prepare for wet feet if it’s been raining, or for a lot of snow if it’s early in the year (prior to mid-July). Soon, Tower Lake will reveal itself.

As you pass on the right side of Tower Lake, you’ll come to a white sign and a small footbridge that take you around, behind the lake. The trail begins to climb again steeply, leading you up the head wall. Once crested, you will wander through the trees for a short distance as Rockbound Lake opens up in front of you. Following the trail to the lake where you’ll turn to your right, following the lakeshore. As you walk east along the lake, you’ll look up to see a large scree slope to the right of the headwall. To the right of that scree slope, you will find a small trail that leads upward. Near the top of the scree, you’ll turn left and traverse through a rock band on to the lower headwall above Rockbound Lake.

This is where the views get good, by the way…

Looking north, you’ll see a well defined trail up an obvious knoll that takes you to the top of the second headwall. From here, a few trails branch off, at times almost disappearing. If you look up to your right, you’ll see Helena Peak and a gully just to the south of it. I believe the regular trail follows this gully, but as it was covered in snow, we chose to ascend to the right of the gully up the scree slope. This route, while steep, is on quite stable rock and scree, and made for a short ascent to Helena ridge. From there, follow the ridge down to the pass and climb straight up the side of Helena Peak to the summit.

As you near the summit, you’ll notice a large rock pile to the east, just down the ridge. This is a memorial site, so please be respectful and leave it as you found it. It’s always fun to discover things like this, so let’s make sure that it lasts to stand for the people it represents and for others to discover.