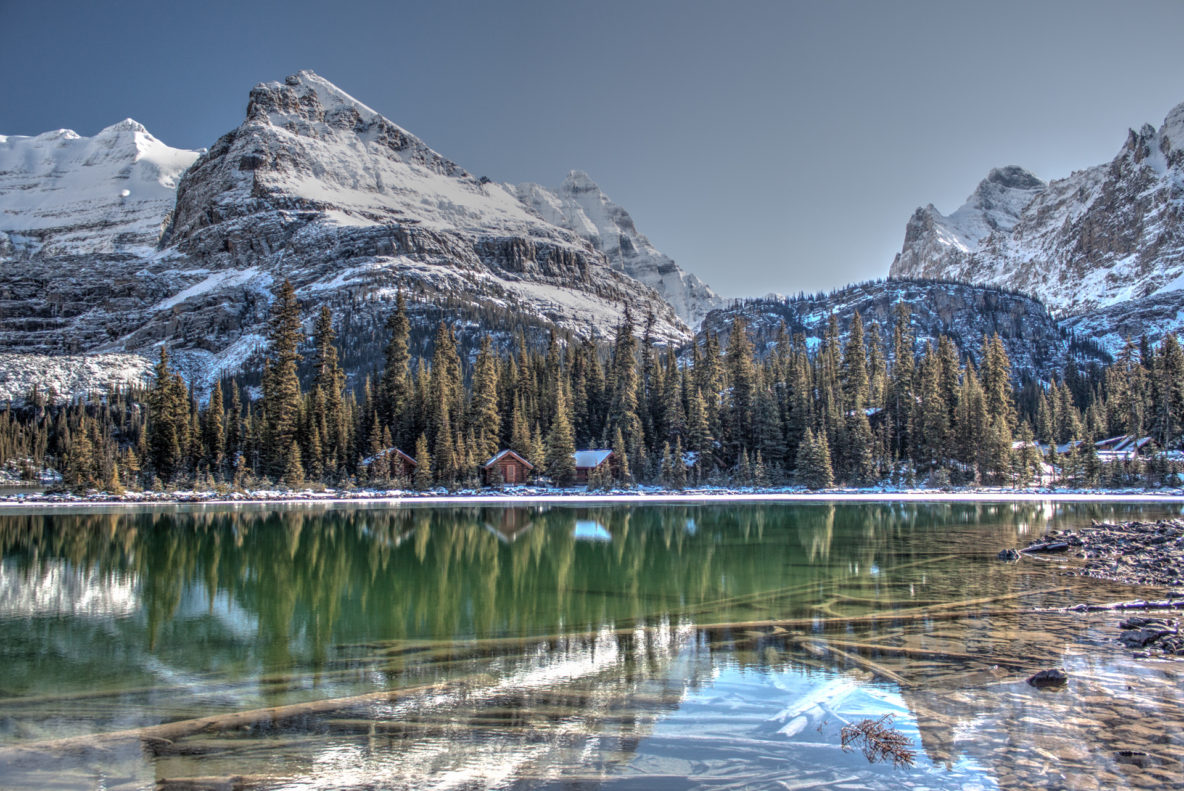 It was moments after that the cameras turned to cover the next piece of news, Anna and I set out to grab a coffee. Twenty minutes of conversation in front of the cameras and while under Ryan’s microscope was hardly enough time to get acquainted. We decided to steal a few minutes at the Garneau Transcend. I remember bluebird skies, and it was rather warm for a February morning. Transcend was the destination, largely because Anna had mentioned the prospect of gluten-free baking. Anyone who knows me could tell you I’m a sucker for sweets. It was a good chat, surreal and without destination.

Heads still spinning from the media gauntlet, we headed separate ways to go after the tasks of the day. Before leaving Transcend, Anna had called my bluff on the Battlestar Galactica reference I made in my Craigslist ad. Frack. Slyly, she turned the tables and invited me over to watch the first few episodes later that afternoon.

BSG turned out to be more interesting than I expected, but in the end, it didn’t drag me through the whole series. Earlier in the week when talking to 92.5 Fresh FM, J’Lyn and Johnny had invited my date and me to join Johnny and Nicole for couples Valentines Yoga that evening. Had I thought this through, I might have thought Johnny didn’t like me: what kind of friend suggests you roll around in a puddle of yourself for 2 hours in front of your new date? Luckily Anna was distracted by her own efforts to not look like a total n00b in front of me. We must have been quite the show.

Knowing we had a busy weekend ahead, we called it a day and set plans for Friday.

I still remember the sound of the crisp snow below my feet. It seemed to resonate through her front stoop as I climbed the wooden stairs in the low afternoon sun. We hung out in the living room, lying opposite from each other laughing, relating, learning and getting into our groove. I’d roll her grape-like toes between my fingers while she joked about my big toe having its own planetary system. Alongside the conversation, we put on a few episodes of Battlestar Galactica and I’m pretty sure I faded in and out as she ran her fingers through my hair.

She had suggested we crash a gathering of a group of her friends dining at Padmanadi that evening, and being in the spirit of party crashing, I was easily obliged. I must apologize to that group of friends, though. In the fray of craziness, I don’t even recall who they were. I’m generally the guy that is good with faces and names. It was like I had been blindfolded and left to spin. All I remember was that we laughed, and I enjoyed their company. The food was ok too, but could have used more animal. Around midnight, we finally headed in.

Earlier in the week, I had run into total strangers that “made” me as Edmonton’s most eligible bachelor (by what standard, I do not know). Sitting in Dawaat a few days before Valentines, a woman stood up and turned to hit up the buffet. “Hey, I know you!” she announced to the restaurant – by that time I was used to it. I have to admit, though, the novelty never wore off. Our night at Padmanadi was just the same. Trevor Boller, a twitter friend (one I had not yet met in person) and talented photographer recognized us and came to say hi. Another tweeted me the next morning to ask if it was us. This series of events sums up just how small our great city is. Edmonton is like a small town with big city appeal. Some will knock it, but every visitor I’ve met that hails from a “real city” can’t get over the camaraderie and familiarity of its residents. But, one thing Anna couldn’t stand was #yeg “circle jerkers”, so I digress.

Saturday started earlier with a late vegetarian breakfast. The details are vague, but I do recall sliced apples scraping roasted almond butter from a plate with the same level of clarity that I recall learning to ride a bike. To this day, it’s probably the most indelible thing I learned from her. That may sound shallow, or trivial, but if you know me and my love of food, it is a significant impression. At this point, we had conversed about pretty much everything freely. Boundaries were pretty much non-existent, except maybe burping and farting. You always save those for the 5th date. We spent much of the afternoon sharing favorite obscure TV shows and music artists. Everything was on the docket: Archer, It’s Always Sunny, IAMX, Seven Lions. We wasted away the early evening talking about our hobbies like painting, writing, and mountains. Lots of mountains. At that point, I even knew which way she preferred her fingers to intertwine with mine.

I cannot thank Kathleen enough, nor The Makk on 124 (god rest its soul) for inviting us for dinner. I should mention that my Instagram feed starts right about here. Anna had convinced me that Instagram was a social media tool essential to one’s eternal happiness. Since this was a weekend of “what the hell’s”, I jumped on the bandwagon. If you are considering participation on this bandwagon, let me offer you one piece of advice: when starting in a new photo platform, don’t start by photographing your food. Within minutes of posting a photo of my dessert, (a delicious flourless chocolate ganache cake, smothered in mango and strawberry sauce) it had been mistaken for meatloaf with ketchup to one, and ugly chocolate cake to another.

My biggest mistake tonight? Posting a pic of my ketchup turd cake. I'll take that as a win. @oaktober #yegblinddate http://t.co/i5ASiQtr

Anna and I laughed more times than I can count, that evening. It was one of those nights a person just never forgets. It was more than just Anna, though. I truly started to see how connective and real social media had become. We connected to people on twitter and Instagram who are now some of my favorite people in this city (not to mention names, JEN ROLLINS and KEN HANSON).

It’s probably like a boring slideshow to you, the reader, but you really should read the whole thread. It’s just a taste of all the twitter fun that happened that night. I can’t thank Anna and the rest of those twisted individuals enough for what those moments mean to me. This 3-hour window contained everything I was hoping to find when I placed my Craigslist ad. Every. Single. Thing.

It was almost midnight when we left The Makk on 124. We had a brief stop to make at a place famous for its Karaoke (or should I say, Claire-e-oke?). Claire had responded to the ad specifically to invite us to her community “50 Shades of Gay” party. Anna and I thought we should, at least, make a brief appearance to see what the excitement was all about. Little did we know what we were getting ourselves into that night (when I got home, I added this to my bucket list, just so I could immediately check it off). It was 2 hours later before we finally left the party. Claire is one of those people that are absolutely infectious. She made two straight kids feel comfortable, even with the “gay-sha” that was 6′ 6″ tall and built like a linebacker (I think he/she actually WAS a linebacker). We partied, laughed, danced, and met some of the most accepting people I have ever met.

I must say that my favourite new friend of the night is @Clairepearen. Thanks for making a couple straight kids feel welcome! #yegblinddate

If you thought the night was done at 2 am, you’d be very, very wrong. Chef Andrew Cowan, the mastermind behind Hundred Bar and Kitchen at the time (now at Northern Chicken and Say Uncle – you should go, nothing short of amazing), was slightly pouting about how I never come for his gluten free brownie. Unable to yield to my weakness for sweets (and an epic 2 hours since I had eaten last), we headed that direction. No sooner than walking in the door, we run into friends of Anna’s, Chris and Jill LaBossier. Their evening was tapering down just before heading in for the night. Almost an hour (and 3 gluten free brownies) later, we called it a night.

I remember being tired Sunday morning. Tired, but happy. My adventure felt complete, even though we had another day we were both contractually obligated to. Despite our fatigue, we had been offered a photoshoot by Hope Walls. We bundled up and went to Argyle, right where the Millcreek Ravine starts to take some fun pics.

So what happened next? This was the question of the hour. Leading up to the date, there were many who accused my short-term scenario as being crude, cold and not very much in the spirit of Valentines. I think even my close friends wondered what might happen next. One of the bolder ones, Trish, isn’t one for mincing words:

Shh, just let it happen 😉 RT @talker1 Well @ericpet isn't the date officially over? Are you both taking the option to extend? @oaktober

This is the perfect spot for a cliff-hanger, but I’ll spare you the wait.

Anna and I didn’t part ways after the weekend. Although we never really dated, most of our close friends accused us of something of the sort. It was an amazing 6 months: from going to the mountains, to burning through Netflix episodes, to painting watercolour, to piling apple slices destined for a sad and short-lived existence before being dunked in Almond Butter and promptly devoured. In light of my recent divorce, however, I was far from ready to be in a relationship, and she had her own reasons to avoid diving in.

The only way I can describe it is that some days are a blur and other moments that are crystal clear (like when Anna, Bachelorette #1 and I played Dream Phone. Chad was so dreamy…). In the end, we both had just enough crazy to make it one of the most memorable times in my life.

The next post is what I’ll make you wait for. You see, up until the ad went viral, none of my friends or acquaintances (except a select few) even knew my kids mother and I had split. At her request, I had kept things under wraps. As I mentioned in an earlier post, when I posted the ad I never expected it to go past that point. For some of my (our) friends, it was just too much to handle. Part 4 will discuss the fallout from the whole thing. The good, the bad, and the ones that had to be blocked on Facebook. Stay tuned…